“Listen to Our Customers. They Know A Lot More Than We Do.”

Customer Focus
In High School, Hines Bending’s founder, James “Jim” Hynes, worked at his father’s Standard Oil (now Amoco) service station where he learned a lot about cars. More importantly, he learned how to service customers, earning their respect and setting what he would later use as “best practices” to achieve extraordinarily high customer satisfaction.

When patrons weren’t stopping for gas, my father would shout, “Are the bathrooms clean?” or “Don’t just stand there, push the broom around,” explained Jim Hynes. On the importance of time management, if there was a line to cash out, he’d say, “Get the money son, you can talk to your friends later.”

Customer Satisfaction DNA
In the ‘60’s and ‘70’s, John Hynes achieved new “standards” for customer service excellence in a time when there were not awards for such. The senior Hynes drove home the need to make customers happy, “Son, we have many customers, like Dr. Samuelson, the heart doctor. He doesn’t want to see your big thumbprint on his steering wheel. But the fact that he’s a doctor doesn’t give him preferential treatment. All customers are important: small…big…new…old.”

One life lesson that defines today’s Hines Bending came after Jim messed up a muffler installation. “Son, admit your mistakes early. This guy … his son … are going to be customers for a long time, and it’s not worth it to screw it up. Do the job right. Everytime. Don’t make excuses. Customers want you to be straightforward. Tell them how you plan to fix it.”

If someone called to ask a question about why his car would not turn over, he would tell them we’d be over to check on it. Regularly, customers’ cars would be picked up (at their home or office) and then returned, fully serviced. “It’s what we do. Let’s be good at it.”

Since 1975, hundreds of customers have purchased a Hines Bending Machine. As their business or needs grew, some customers purchased more than one bender. The success that many of our customers have enjoyed is detailed in the Industries section. There is no doubt that their voice has helped to build the Hines Bending System brand, the undisputed global leader in pipe and tube bending machines. 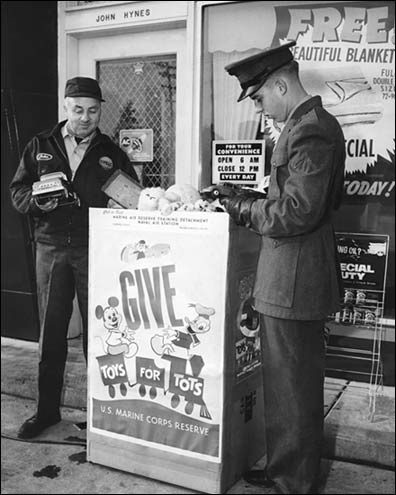 JOHN HYNES SERVED DURING THE KOREAN WAR IN THE U.S. NAVY. WHEN HE RETURNED HOME, HE WOULD EMPLOY U.S. SERVICEMAN ON HIS WORKFORCE. AND AS AN ADDED WAY TO GIVE THANKS, HE WOULD HELP RUN THE TOYS FOR TOTS DRIVE FOR THE LOCAL MARINE UNIT. HYNES WAS AN ALDERMAN AT HIS CHURCH AND DROVE A SCHOOL BUS WITHOUT PAY EACH MORNING. HIS SERVICE STATION WAS THE FAVORITE PLACE TO PARK BUSES AND GATHER FOR COFFEE.

ABOUT
CUSTOMER PROMISES
CUSTOMERS FIRST
WHY BUY A HINES?